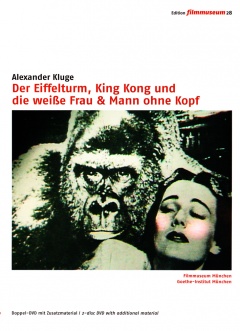 The Eiffel Tower, King Kong, and the White Woman: A typical magazine from the start-up period of the independent television window in private broadcast TV. All traditional possibilities for expression in film and many types of television are experimented with: Editing, collage, multiple exposure, narrative interlacing. It deals with the opera, the French Revolution, the Eiffel tower, hit songs from 1932, and Walter Benjamin.

Headless Man: Ballads and murder ballads are elemental narrative styles that are the precursor to the cinema. They relate destinies and emotion. A tiger saves a young maiden from a Turkish man; a stepmother kills the child she was entrusted with. But how do you tell about the construction work at dusk in the ruins of the Twin Towers or about Amok? Additional texts from his work at television in the booklet and as ROM features.