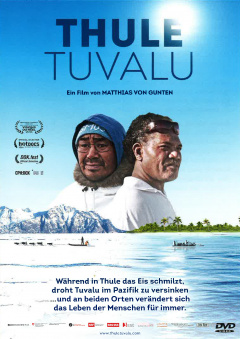 THULETUVALU is about people from two entirely different ends of the earth who are increasingly bound together by the ongoing process of global warming, people who in both places are being confronted with the fact that they must change the very essence of their existences. The film tells of hunters in Thule in North Greenland, the northernmost point on Earth, who still, like their ancestors, spend most of the year at temperatures up to 40° below zero in clothes made of hide and who go out hunting with dogdrawn sleds to feed their families and their dogs. And it tells of the island dwellers of Tuvalu, who live on narrow coral reefs in the endless Pacific and who, like many generations before them, nourish themselves with fish, coconut and the vegetables they themselves cultivate.

At both locations the film participates in the partially archaic lives of these so disparate worlds – that of the icy north and that of the tropical Pacific island. Over its course, not only the disimillarities but also ever more connections and commonalities become apparent: it is seen at both locations that regardless of whether it‘s a matter of hunting or fishing, a sled ride or the construction of a canoe, the sea, the primary source of nourishment, is that which determines the entire existence of these people. In both places we experience how this close, dependent relationship on nature has established enduring and specific approaches for lives led for centuries at such remove from the rest of the world. In observing the protagonists, it becomes ever plainer how the melting of ice in the north alters the seasons, the landscape and also entire lives, just as the thus-ensuing rise in sea levels means the inhabitants of Tuvalu are exposed to the threat of having their homeland one day sink beneath the waves. Together with the main characters of this film, we experience how these changes to their environments increasingly determine their plans and thoughts. They struggle to take a stance between hope and fury, resignation and confidence. And some of them even find themselves forced to draw a line beneath their previous existence and to start all over in an entirely different life.

The stories from these two locations merge during the course of the film to become one narrative in which the protagonists increasingly assume the form of first and finest seismographs, registering a transformation that will one day touch everyone on Earth.