In his short career, Apichatpong Weerasethakul has come to be recognised as one of the most original voices in Asian and world cinema. His four feature films and his short films have won him widespread international recognition and numerous festival prizes. »Blisfuly Yours« (2002) won the prize of »Un Certain Regard«, and »Tropical Malady« (2004) the Jury Prize of the Cannes Film Festival Competition. His feature Syndromes and a Century (2006) was the first Thai film to be selected for competition at the Venice Film Festival. With »Tropical Malady«, »Syndromes and a Century« has been recognised as one of the best films of the last decade in several 2010 polls.

Apichatpong was born in Bangkok and grew up in Khon Kaen in north-eastern Thailand. He holds a degree in Architecture from Khon Kaen University and a Master of Fine Arts in filmmaking from the School of the Art Institute of Chicago. He began making film and video shorts in 1994, and completed his first feature in 2000. Lyrical and often fascinatingly mysterious, his works deal with memory, subtly addressing personal politics and social issues. Working outside of the strict Thai film studio system, he is active in promoting independent filmmaking through his company »Kick the Machine«, founded in 1999. He has also mounted exhibitions and installations in many countries since 1998. In 2007 The Thai Ministry of Culture awarded Apichatpong with one of Thailand’s most important awards for visual artists, the Silpatorn Award. In 2008, he became the first artist to receive the Fine Prize from the 55th Carnegie International, USA, and last year he was short listed for one of the art world’s most prestigious awards, the Hugo Boss Award with the winner to be announced in 2010.

»Uncle Boonmee Who Can Recall His Past Lives« compliments Apichatpong’s ‘Primitive project’, which deals with ideas of extinction and the recollection of past lives. Other elements of the project are the ambitious multiscreen installation, ‘Primitive’, which was presented in 2009 in Munich, Liverpool, and at the Musée d’Art Moderne de la Ville de Paris and two short films, ‘A Letter to Uncle Boonmee’ and ‘Phantoms of Nabua’. 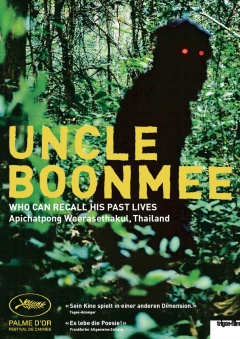 Uncle Boonmee Who Can Recall His Past Lives (2010)

Suffering from acute kidney failure, Uncle Boonmee has chosen to spend his final days surrounded by his loved ones in the countryside. Surprisingly, the ghost of his deceased wife appears to care for him, and his long lost son returns home in a non-human form. Contemplating the reasons for his illness, Boonmee treks through the jungle with his family to a mysterious hilltop cave -- the birthplace of his first life... From the director of SYNDROMES AND A CENTURY, TROPICAL MALADY and BLISSFULLY YOURS. More