By the age of ten, Ariel Winograd (Buenos Aires, 1977) knew he wanted to work in film and comedy. He studied film direction at Argentina’s Universidad del Cine and as a student, shot several short films that won international awards, as well as music videos, documentaries and television programs. After graduating, Winograd did several workshops and internships on scriptwriting and directing abroad. In 2006, he wrote and directed his first film, the bio pic Cara de queso (Cheesehead). This rose-colored comedy with a cast of great actors sparked much interest in young viewers, who felt connected to a fresh, bold film narrative not commonly found in Argentine film. In 2011, Winograd directed Mi primera boda (My First Wedding), written by Patricio Vega but based on Winograd and his wife’s real-life wedding. With a cast of stars led by Natalia Oreiro and Daniel Hendler, it brought 300,000 Argentines into theaters, making it one of Argentina’s top box offices hits that year. In the years since, Winograd has directed Vino para robar (To Fool a Thief, with Valeria Bertucelli and Daniel Hendler, 2013), Sin hijos (No Kids, with Diego Peretti and Maribel Verdú, 2015), and Permitidos (That’s Not Cheating, with Lali Espósito and Martín Piroyansky, 2016). Besides allowing him to grow as a director, these films have gradually consolidated Winograd’s reputation among Argentine moviegoers. His last film in Argentina, Mamá se fue de viaje (Ten Days without Mom), starring Diego Peretti and Carla Peterson, became the top grossing Argentine film of 2017, with more than 1.7 million tickets sold. In the past two years, he has directed two feature-length films in Mexico at the behest of local producers: Todos caen (with Martha Higareda and Omar Chaparro) and Backseat Driver (with Mauricio Ochmann and Omar Chaparro), two films that have generated plenty of anticipation in both Mexico and the U.S. 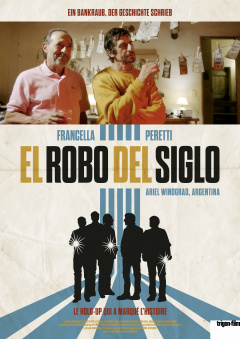 In 2006, a group of thieves performed what is considered one of the most famous and smart bank heists in the history of Argentina. How they robbed the Rio bank is as surprising as what happened afterwards. This is their story. More