When “Der Besuch der alten Dame” premiered in Zurich in early 1956, Friedrich Dürrenmatt couldn’t have guessed that the story of a wealthy woman corrupting a whole village was destined to become a key text for the second half of the 20th century – how obvious it might look in hindsight. After turning into a world-wide success story, a first film version was made in 1963 by Bernard Wicki as a star-studded international co-production that moved the story from small-town Switzerland to a vaguely Balkan place and changed the merciless original finale into a Happy End. No such nonsense with Djibril Diop Mambéty! What looks at first like a mildly exotic take on Dürrenmatt proves on closer inspection to be the most congenially accurate adaptation of this particular work for cinema and television alike. That said: Djibril Diop Mambéty couldn’t persuade himself to be quite as cold and cynical as Dürrenmatt: Linguère Ramatou still sees to it that all citizens of Colobane take part in the murder of Dramaan Drameh who betrayed her when she was young, but it’s done in a decidedly more colorful fashion than anybody here would dare, not to mention those cheeky surrealist touches added by the master in his inimitable fashion. (Olaf Möller, Viennale)

Djibril Diop Mambéty (January 1945 – July 1998) was a Senegalese film director, actor, orator, composer and poet. Though he made only two feature films and five short films, they all received international acclaim for their original and experimental cin- ematic technique and non-linear, unconventional narrative styles. In 1973, Mambéty released his masterpiece, Touki Bouki (The Hyena’s Journey), a tour de force of narrative and aesthetic innovation. It was unlike anything in the history of African cinema; today, film scholars around the world agree that Touki Bouki is a classic. Mambéty mixes elements of varying storytelling techniques and cinematic traditions to create phantasmal images of postcolonial African society in the throes of modernity. His images and narrative style invite the viewer to unders- tand the film in dialectical terms. In 1992, Mambéty returned to the limelight with an ambitious new film, Hyènes [Hyenas]. It was an adaptation of the Swiss-German writer Friedrich Dürrenmatt’s satirical play The Visit. Mambéty’s authorial voice is strong and clear in Hyenas; as one critic observed, the uniqueness of the direction throughout the film “undoubtedly stems in part from his own magisterial sense of presence.” Hyenas was conceived as the second instalment — following Touki Bouki — of a trilogy about power and insanity. The grand theme, once again, is human greed. As Mambéty himself observed, the story shows how neo-colonial relations in Africa are “betraying the hopes of independence for the false promises of Western mate- rialism”, and how Africans have been corrupted by that materialism. Adapted from: N. Frank Ukadike, “The Hyena’s Last Laugh”, Transition 78, 1999 (newsreel.org) 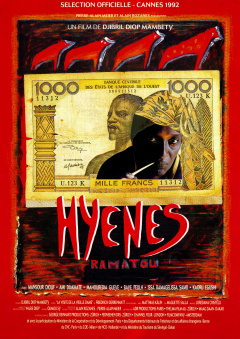 To the dusty streets of Colobane, a once charming village now devastated by poverty, Linguère Ramatou returns with fabulous wealth and a promise to save her people. But, tied to this promise is a deadly bargain: Draman Drameh — the lover who had betrayed a 16-year-old, pregnant Linguère — must be executed. The announcement is made during a celebratory banquet in honour of her return. The villagers, who had long forgotten the incident, are at once confused, horrified and outraged. More 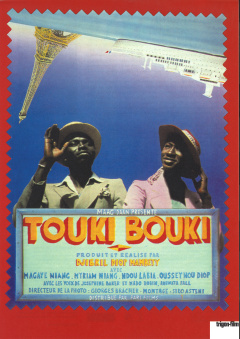 Mory, a cowherd who rides a motorcycle mounted with a cow's skull, and Anta, a university student, have met in Dakar, Senegal's capital. Alienated and disaffected with Senegal and Africa, they long to go to Paris and work up different con schemes to raise the money. Mory steals clothing and money from a wealthy gay man who had brought him home, and he and Anta book passage on a ship to France. One of the most important, engaged and fascinating movies from Africa - selected for the documenta 2007. More