Bosnia and Herzegovina
3 Films in collection

Born in Sarajevo in 1974, Jasmila is a graduate of her native city's Academy of Dramatic Arts, Theatre and Film Directing Department. Before filmmaking, she also worked as a puppeteer in the Vermont-based Bread and Puppet Theater and as a clown in a Lee Delong workshop.

Her feature debut GRBAVICA won the 2006 Berlinale Golden Bear (as well as the Prize of the Ecumenical Jury and the Peace Prize), the AFI (American Film Institute) Fest Grand Jury Prize, Grand Prix Odyssey of the European Council and was sold to 40 territories with great success. ON THE PATH, Jasmila's second feature film, premiered at the 2010 Berlinale, in the Competition section. The film had worldwide distribution on 25 territories and won numerous awards including Filmkunstfestival Schwerin Award for Best Director, Golden Apricot IFF Yerevan - FIPRESCI Prize, Pula Film Festival 2010 - Golden Arena for Best Director, Nomination - European Film Award for Best Actress.
All her films were produced through Deblokada, an artists' association that she founded. 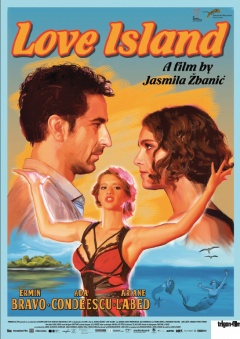 Grebo and his very pregnant wife Liliane are taking a well-deserved vacation at a popular Adriatic seaside resort. All inclusive! All the sun, swimming and fun that their hearts desire. What could possibly go wrong on such an idyllic holiday? At open-mike night, Grebo seduces the resort crowd and reminds his loving French wife of the Sarajevo rocker she fell in love with. But the evening's big surpise is the young couple's meeting with mysterious Flora. The charismatic young woman will soon put their young marriage to the test. Past secrets cannot stay hidden for long on Love Island. More 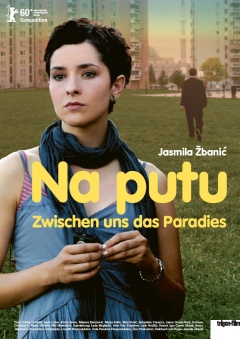 Luna and Amar are a couple. Their relationship is under great strain. First of all, Amar loses his job for being drunk at work. Luna is very worried and haslittle hope of realising her fragile dream of having a child with Amar. But her fears for their future increase when Amar takes on a well-paid job in aMuslim community hours away from where they live.Only after quite some time has elapsed during which they have had no contact with each other, is Luna allowed to visit Amar in this community of conservative Wahhabis in its idyllic lakeside location. More 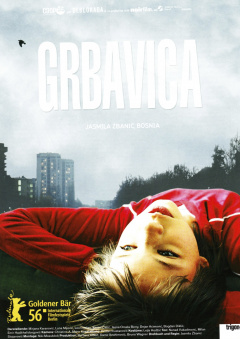 Esma (Mirjana Karanovic) is living with her 12-year-old daughter Sara (Luna Mijovic) in Grbavica, a quarter of the Bosnian capital Sarajevo. Saras class plans to go on a school trip. Since children of fallen warriors in the last war are not supposed to pay, Sara thinks that she is one of them (because her mother told her that her father got killed in war). Esma has two things to deal with and that is the explanation to her only child that she was raped and that Sara's father is not a fallen warrior, and she has to collect the money for her daughter to go to the school trip. More